It’s funny how as soon as people hear I’m a storyteller, they assume that I work with children. While that’s mostly true, it’s not entirely true. Occasionally I get the opportunity to tell stories to groups of adults. Whenever I do, it’s always an absolute blast. I love seeing adults let their “inner child” come out to play. It seems like there’s something about putting on a goofy costume hat that will bring out the child in anybody. On top of this, I’ve never met anyone who can’t relate to a folktale — no matter what part of the world it’s coming from. Folktales are exactly that — tales of the common folk — and they strike at the core of what it means to be human, whatever your age, race or cultural background.

This past December I had the opportunity to perform “Rabbit’s Christmas Gift,” my adaptation of a story based on a Chinese folktale, at a Christmas party for retired Salvation Army officers. It was wonderful to share this story about giving and thinking of others first with a group of people who know all about both of those things — particularly during the Christmas season. The majority of Salvation Army officers that I have known work tirelessly during the holiday season. Their efforts to provide a Merry Christmas for the less fortunate often take away from their ability to enjoy the season with their own friends and loved ones. (I have even heard stories of Salvation Army officers and their families who put up their Christmas tree in October or earlier — otherwise, they’ll never have a chance to do it!) It truly is a ministry of sacrifice.

Below are some photos from the performance that show that “children” of all ages love a good story! 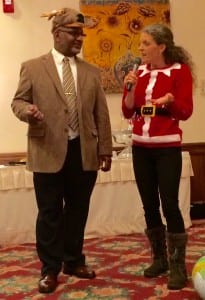 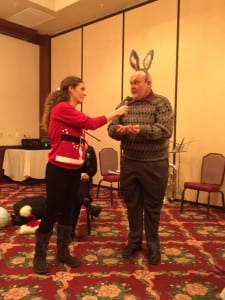 Mr. Donkey is so excited he can’t help but “hee-haw” for the crowd. 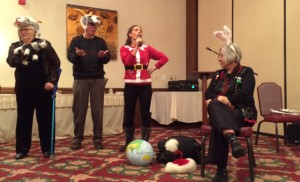 The Goat family considering the gift they will give as Rabbit looks on.