How Cheetah Got His Speed: A Folktale from Africa

The Tug of War: A Folktale from Africa

Lindsay has written, co-produced and starred in two short films based on some of her most popular storytelling programs. These family-friendly films were designed to inspire the imagination while encouraging young viewers to have their own story-based adventures.

When siblings Adam and Leah are left with eccentric babysitter, Lindsay, she turns their living room into an airplane and whisks them and their unsuspecting friends away on an imaginative adventure. With the help of items from her unusual traveler’s bag, they bring to life the famous Indian folktale, “The Monkey and the Crocodile,” while learning an unforgettable lesson about friendship.

Leah is ready for a fun day of baking Christmas cookies, but when Mom has to work again, her hopes are dashed. Enter zany babysitter Lindsay, who turns their kitchen table into a boat and draws Leah, her brother Adam, and their friends into another imaginative adventure. With items from her traveler’s bag, they bring to life the Russian folktale “Babushka,” while learning that you should never be too busy for what’s truly important. 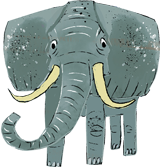