As I discussed in my previous post, telling multicultural tales to the people to whom those tales “belong” can be a humbling experience. However, I have also found it to be deeply gratifying. In fact, some of my favorite moments as a storyteller have happened on such occasions.

A few years ago I have the privilege of telling the famous Indian folktale, The Monkey and the Crocodile, at a local library. When the performance concluded, a woman of Indian descent came up to me with her young daughter in tow. She thanked me profusely and said, “My grandmother used to tell me that story when I was a little girl. I had forgotten all about it, but as soon as you began to tell, it all started coming back to me. I came today thinking that this was just going to be for my daughter, but I have received something special as well. Now we can share this story together.”

Her words were a great gift to me. Not only had the story transported her to her homeland for a brief time, it had also brought to memory a story of cultural significance that she could continue to pass on to her own children. I am married to an immigrant and have many immigrant friends here in the United States. I have noticed that while some people hang on to their cultural traditions here in their new country, it seems that just as many remove themselves from them altogether in an attempt to assimilate. I have found that when the foreign-born see someone from outside their culture ascribing value to their traditions it often reinforces their pride in their cultural heritage and creates a desire to share it with others.

A good example of this occurred while I was doing some work with an after-school program for fifth and sixth grade students in the Akron area. Over a four week period, I would work with three different groups of students, telling multicultural stories. One of the groups in particular was very diverse with students from Mexico, Thailand, Burma and beyond.

On one occasion right around Halloween, I happened to be telling a Mexican folktale, The Perfect Madrina, that introduces the Mexican holiday, El Dia de Los Muertos (The Day of the Dead.) The Mexican students were very eager to participate and quite a few of them ended up taking on roles in the story. Since I use some Spanish language in the telling, they were excited to respond to me in their native tongue. At the conclusion of the story, I showed some pictures from a book which allowed the students to see more about how the holiday is celebrated. 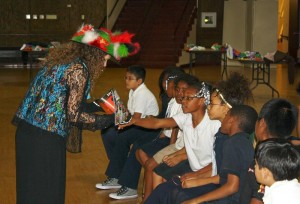 The non-Mexican students in audience were very intrigued. “Is it really like that?” they asked. They also pointed at some of the pictures and wanted to know more. This gave the Mexican students a chance to be the “experts” and to answer their questions. Suddenly, the things that before the show had singled them out as different from their classmates (language, customs, food, etc) became a topic of great interest and appreciation to their peers. This is a moment that I will cherish for a long time. (For classroom teachers working with diverse student populations, the use of folklore is a great way to foster unity and develop respect for foreign-born students.)

Most recently, I was performing my Chinese New Year Celebration program. At the conclusion, a girl of about 13 years old of Chinese descent came up to thank me for coming. Later on, two other girls, one Chinese and one from the US, joined her. They were followed by a woman who went right up the world map that I use in my performances and began to look for some particular Chinese cities on the map. What I came to understand was that she was the mother of the three and was pointing out the places from which the two Chinese girls had been adopted. All three girls looked at the map with great interest.

Then the American-born sister put a hand on the 13 year old’s shoulder and said, “Today we’re celebrating her ‘gotcha’ day! It’s kind of like another birthday!” The mother explained that the “gotcha day” was the first day that this family had been able to hold this child in their arms after the long adoption process. The whole quartet beamed proudly at the thought.

“Thank you,” said the mother. “I try to take my children to a lot of different cultural events, but this is the first time that we’ve heard these stories. It really means a lot to know these beautiful tales.” I couldn’t help but smile. Theirs was a beautiful tale in and of itself.

For me telling multicultural folktales is an opportunity to ascribe value and worth to cultures and traditions different from my own. While we can be proud of our heritage as Americans, we lose nothing by learning about diverse traditions. Instead, this enriches our own understanding. In fact, I don’t think I ever really understood American culture until I started traveling and living abroad and having a wider lens from which to view it.

Telling multicultural tales is particularly meaningful in areas where diversity is lacking, newly growing or misunderstood. I have found that my multicultural audiences have been appreciative of my attempts to shine light upon their positive cultural contributions and to encourage others to learn more. This had made the experience of telling these tales both humbling and deeply gratifying for me.

Do you have a favorite experience of telling a multicultural story?