This was my fourth summer in a row working with the Stark County District Library and its ten locations. This year, since they were using an exercise theme, they decided to depart from doing a typical performance and asked me to do a creative movement and dance workshop that would have participants moving around and working up a sweat. The workshop was promoted to students in grades K-5, but older siblings, parents, and even grandparents got in on the fun at many of the locations.

I must say that it makes a HUGE difference when adults get involved instead of watching from the sidelines. When children see adults letting loose, being creative and showing their “goofy” side, their eyes light up, and they find a certain fearless freedom to participate with unashamed gusto. The energy in the room becomes electric, and there is something almost magical about it. 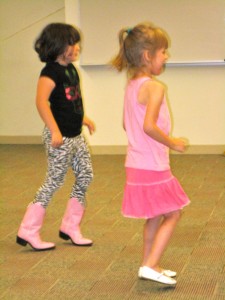 Two young girls hold nothing back as they dance to the beat!

Unfortunately, not all adults are willing to put themselves out there in this way. Some prefer to maintain their polished adult image rather than tapping into their creative spirit alongside their child. In one workshop I gave, no matter how I tried to encourage participation, the adults politely refused. At one point, I asked if there were any adult volunteers willing to tap out a beat for us to dance to on a simple rhythm instrument. Not one adult volunteered. Instead, many children raced over to their parents and began to raise their hands or attempt to pull them to their feet.

“Ooh! My mom wants to! Please! Give her a chance!” Despite the children’s promptings and pleadings, there was only one mom in the room who took a turn.

Was it fear? Shyness? The fact that they believed they had come to watch and not to participate that held them back? I’m not sure. But the look of pride on each child’s face as they rushed over to nominate their parent followed by the look of disappointment as their parent flatly refused stuck with me.

As I left that program, I found myself wondering, “What kind of parents will these children grow up to be? Will they be the ones to sit on the sidelines and watch because “that’s what adults do”? Or will they find the courage to break the mold they’ve been shown and set a different example for their children?”

Now just to be clear, I’m not trying to say that the parents who refused to participate are bad parents. There could be a number of reasons for their failure to participate, everything from health concerns to having a lousy day to a bad past experience in a similar program. What I am saying is that adult participation does make a difference, maybe more of a difference than we always realize, and it does set a precedent as well. 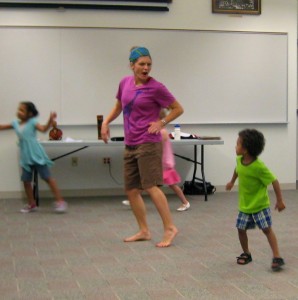 A young boy copies a dance move during a workshop.

So I ask myself: What kind of example we are setting for our children? Is it one of fear? Unwillingness to step out of our comfort zones? Try new things? Do something creative? Silly? Goofy? Just plain fun? Or have we taken the meaning of ‘acting like adults’ so far to the extreme that we exclude ourselves from doing anything even remotely childlike?

Now for every adult that sat on the sidelines, there were just as many, who were willing to get in on the action. I wish I could tell each of their stories, but instead, I’ll just try to share a few examples.

At one library branch we had reached one of the last activities of the workshop, something I like to call the Dance Circle. For the Dance Circle, everyone stands in a circle and one person steps into the center of the circle and begins to do a dance move. It can be one they have just learned or one of their own creation. As they dance, everyone copies their movement until the whole circle is doing it together. They are given a round of applause and the next person steps into the circle.

Well, on this particular day we had a rather large group. One young mom stepped into the circle with her baby. She was thinking about how she could move while holding the baby, when all of a sudden the baby began to move her hands up and down, excited by the music and attention. We all copied her motion which left everyone laughing in delight.

Not long after that, a grandmother who was flanked by her two granddaughters stepped into the circle and did her own exuberant move. As she stepped out of the circle to complete her turn, her granddaughters engulfed her in hugs and smiled up at her, their faces awash with pride. This beautiful moment reminded me of how appreciative children are when we step into their worlds, when we do something that’s on their level. I bet that moment is something they will never forget, a memory of their grandmother that they will always treasure.

At another library, I saw a grandmother and granddaughter who did the whole workshop together, coming up with tandem moves for each activity. They were practically connected at the hip. As I was leaving, the little girl came up to me and said, “That was fun. You’re fun.”

“Thanks,” I said. “I’m glad you had fun!” Then I asked her: “And who was that really cool lady you were dancing with today?”

“That’s my grandma,” she said.

“She looks pretty fun too,” I said.

“Yeah,” said the girl smiling proudly, “she is.”

So in closing, I’ll leave you with this quote by Pablo Neruda, the famous Chilean poet, in the hopes that your childlike flame and your playful spirit will always burn bright. 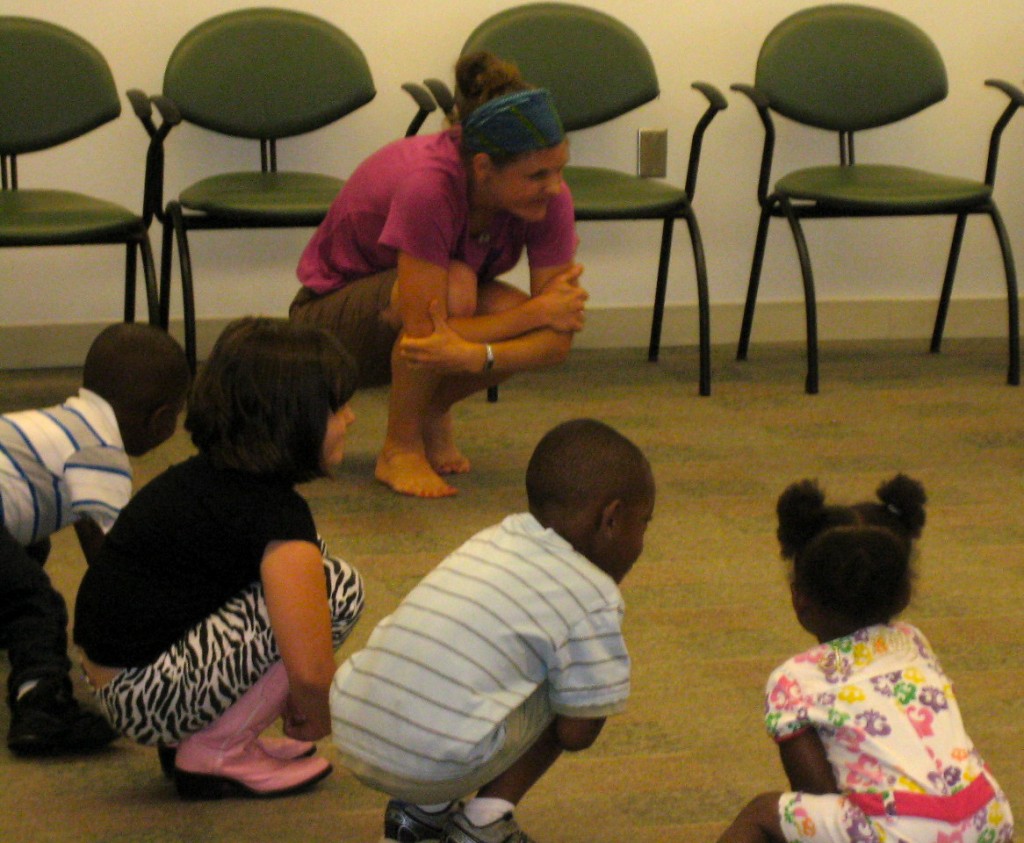 Doing a warm up where we see how small we can make our bodies and faces before we start the dancing!