On my last day of workshops with Stark County District Library, I arrived at my first library of the day and began to wait for the children to arrive. The librarian expressed a concern to me. I usually did my performances in the afternoons. This time her library had been scheduled for a morning slot, the same time of day when the children in the neighborhood attended a summer camp. She hoped we would still get a crowd, but she didn’t know. 11am rolled around, the workshop start time, and no one had arrived. We waited.

The woman responsible for children’s programming for the whole library system arrived. She’d already attended three or four of my previous workshops, but finding it to be a great workout decided to join us for another. She waited with us. Pretty soon it was 11:15am, and there wasn’t one child in the library. We all wondered how long we should wait.

A few moments later two adolescent girls entered the library, making a beeline for the computers. We saw them come and looked at each other. Should we invite them to the workshop, even though it was promoted for K-5th graders? The general consensus was no. They were probably more interested in surfing the net and would consider themselves too cool for this.

Around 11:20am, a young girl came into the library with her father. The librarian approached to see if she was interested in dancing. She shyly declined. I decided to try another tactic, showing her my shekere from Africa, and allowing her to try it out while telling her about how it was made. From there she came over to play a rhythm instrument I’d recently brought back from a trip to Guatemala. I asked if she’d like me to tap out a beat on it so she could dance. She declined but agreed to tap out a beat for us to dance to. So together the librarian, children’s programmer and I danced around the room, making her smile with our wild moves.

From there I turned on some music, the sounds of Ecuadorian pan flutes. I turned it on quietly at first. We were a small group using an open space in the library, not a closed meeting room, so I didn’t want to disturb the other patrons. But the children’s librarian admonished me, saying, “Turn it up! This is my program, and I want to hear that music!” So with the music coursing through the library, we imagined that our hands and feet were dipped in paint, and we walked around the room covering the space above us, below us and at our sides.

As we moved with abandon, allowing different parts of our body to guide our movement, we began to draw a crowd. Soon the two adolescent girls we’d spotted initially had ditched the computers and were asking if they could join in, followed by a teen boy. Then one of the librarians sitting at the desk came over, and what had started out as a disappointing no-show workshop turned into one of my most memorable days yet.

Looking back, I feel bad for underestimating these adolescents. I made an assumption that they would not be interested, and based on my assumption, I didn’t even extend them an invitation to participate. That was my mistake, and I hope I won’t make the same mistake in the future.

How quick we as humans are to make assumptions! We often make them based on our past experiences; and yet, what’s to say that the circumstances in this particular moment won’t contribute to a new experience? Unfortunately, sometimes we get so locked into our assumptions that we fail to see beyond them and act according to them rather than according to the reality of the present moment. We have to be careful about this as it can keep us from being open to others and offering the best of ourselves to everyone that we meet.

I assumed that the teens would think they were too cool for me. I assumed they’d rather spend their summer day fiddling around on their facebook pages. Not only did I underestimate them, I underestimated the power of the creative arts to break down barriers and bring people of all ages together. I underestimated the irresistibly of music and movement, and how sometimes all it takes is one person on the dance floor to get the party started.

So what are you waiting for? Turn up the music, and invite someone to dance! Or else just start dancing yourself! You may be surprised who hears the music and wants to join in! I know I was!

Who are you underestimating or making a false assumption about today?

If you’re interested in booking a Creative Movement and Dance Workshop or would like more information about this and/or other workshops, please contact me at info@lindsaybonilla.com 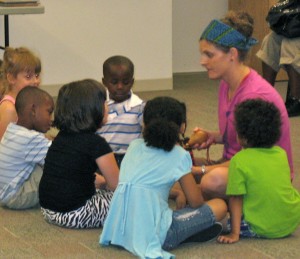 Children love learning about the shekere, a West African musical instrument made from a calabash!