Earlier this month I told the story of Frog and Snake for the first time. This folktale of the Ekoi people from the Cameroon and Nigeria deals with the concept of taught prejudice, making it as relevant today as when it was first told. In the story, a young frog and snake meet and become friends. They spend an entire day together, teaching one another how to hop and slither. They have so much fun that they decide to meet again the next day.

However, when their mothers find out that they have been “playing with the enemy,” they are soundly reprimanded and told that they are never to play with the other. Mama Frog informs her son that snakes eat frogs, instilling fear in her child. Mama Snake insists that the next time her son sees frog he must eat him, instilling a bully-like instinct in her child. Both frog and snake are confused and saddened by their mother’s words and unsure of how to view the other.

The next day young snake goes out to meet his friend as promised, but when frog never shows, he goes out searching for him. He finds him at home in the swamp where frog explains that his mother has forbidden them to play together.

Snake, of course, has been told the same thing, but the pleads with his friend, saying, “I don’t want to eat you. I just want to play with you. Won’t you please come out and play?”

Well, on this particular day as I was about to give frog’s answer, the young boy who was playing the role of frog spoke up himself and said, “No, I want to stay home today.”

I could see by the look on his face that he was busy thinking about what Mama Frog had said — that Snake was going to eat him. Just like the fictional character in the story, this young boy in role was afraid to go out and play again. He did not need to be told what happened next in the story. Fear had taken root and given him the answer.

And isn’t that how prejudice works? Someone is made to believe the worst about someone else, and even if their own experience doesn’t mesh with it that fear is powerful enough to keep the negative thoughts at the forefront of their mind. I saw how quickly that happened for this child who was participating in the story. How much more so when the “advice” came from a trusted adult, in this case, the mother.

Young children are able to inhabit a world without prejudice, where differences do not lead to fear and do not prevent friendship. We adults have much to learn from them. In an age where racism still runs rampant, we must strive to set the right example for our children. We must teach them to value diversity instead of fearing it. Imagine how different the world would be if our lives embodied that lesson. 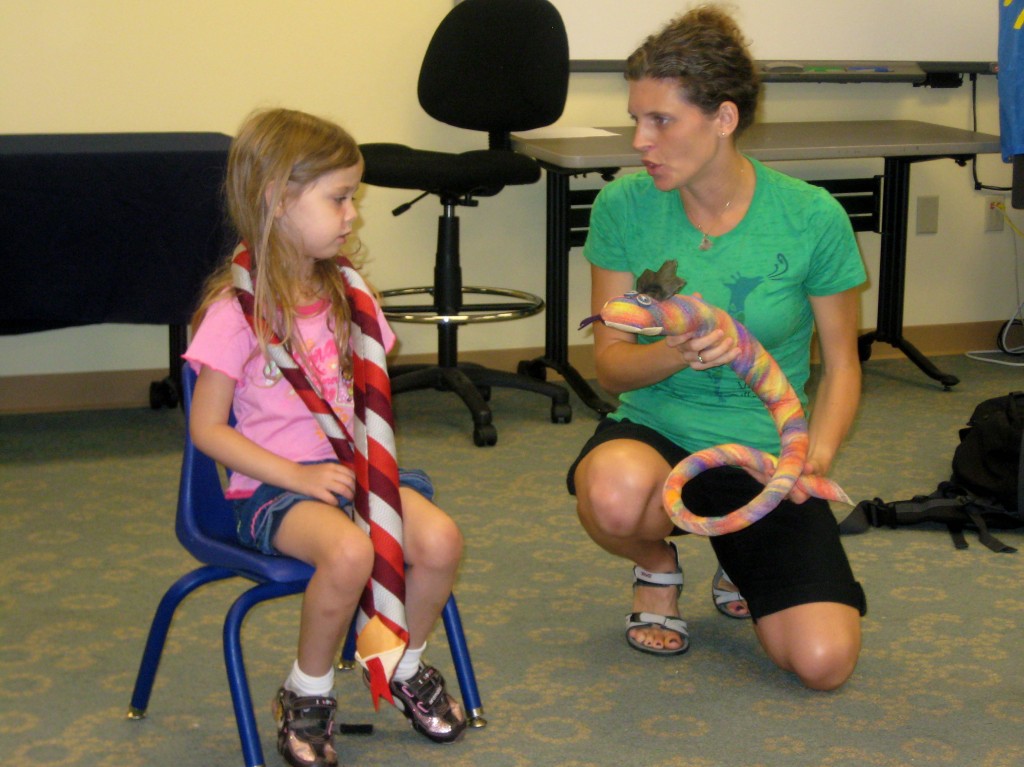 Mama Snake and Snake Child engaged in a conversation.