This month I’m exploring perspective in picture books. I love getting into the mind of different characters and playing with who should tell a story and how it should be told. Each of the following books does just that — playing with point of view and perspective in a unique way.

They All Saw a Cat

This book blew me away with its brilliance and beauty. I love the way it shows children that while we may all see the same thing, we don’t all see it the same way. It’s the story of a cat who goes walking through the world, encountering many different creatures along his path. However, on each page spread, the cat is depicted differently, as it would be seen thru the eyes of the other character.

On the spread with a fox in hot pursuit the cat looks especially plump; on the spread with a flea it looks like a mess of hair; and on the spread with the mouse, its claws and teeth are exaggerated, making it look like a monster. Lastly, the cat comes to a river, and we get to see how the cat sees itself. This fascinating book was the beginning of some interesting discussions with my son about perspective and point of view and how that influences the way we see things. It’s an important conversation to have if we want to help people of all ages learn to see from a lens different than their own. 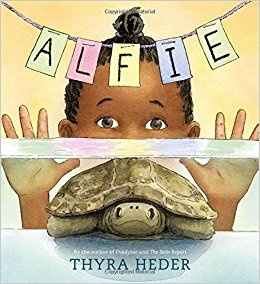 The illustrations in this book are adorable and immediately drew me in. The story starts out being told from the point of view of Nia. On her six birthday, she gets a pet turtle, Alfie, who is also turning six. Over the course of the next year, Nia does everything she can to build a relationship with Alfie from bringing him gifts to telling him jokes, but his lack of response leaves her feeling like it’s not worth the effort. Then on the morning of their 7th birthday, Alfie disappears!

At this point, the book switches perspective and is told from the point of view of Alfie. Heder perfectly captures the voice of Alfie with her descriptions [“her (Nia’s) home tickled my toes”]. My favorite page has Alfie saying, “She (Nia) made me laugh and laugh and laugh.” This is contrasted with the illustration of a straight-faced turtle, showing how what Alfie feels on the inside is not communicated on the outside. It turns out that the reason Alfie has disappeared is that he’s on a mission to find the perfect birthday present for his dear Nia. The mission ends up taking much longer than planned, but somehow Alfie shows up right on time with the perfect gift. This sweet story of friendship told from two different points of view is made more meaningful after reading the author’s note and discovering that the story is based in real life. 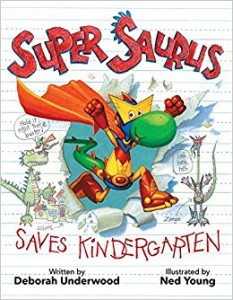 Every child (and many adults!) has a vibrant inner world. They alternate from   what is actually to happening (reality) to their own imagined version of what is happening and that’s exactly what Arnold, the main character in this picture book does as well. Arnold doesn’t want to go to kindergarten so when he meets his teacher Mr. Z for the first time he imagines him as the Evil Zorgo. Arnold does whatever he can to escape Evil Zorgo’s clutches — even climbing to the top of the tallest skyscraper which in reality is the slide on the school playground.

From an author’s perspective, I’ve often wondered how to differentiate between a character’s real and imagined worlds in my own writing, and I love the seamless way it’s done here both through the presentation of the text and illustrations. On pages that depict what is actually happening to Arnold, a traditional font is used and the illustrations depict Arnold in his everyday clothing. On the pages depicting what Arnold imagines to be happening a funkier, more italicized font is used and all text appears in a yellow text block. The illustrations in these imagined spreads depict Arnold wearing his Super Saurus costume. These simple changes make it easy for the reader to follow all of Arnold’s story — both what the outside world sees and what he’s experiencing internally.

One Response to “Playing with Perspective in Picture Books”