Here they are in no particular order: 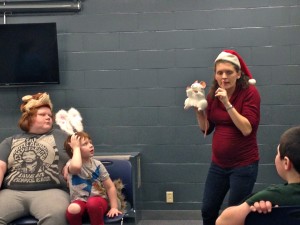 Fox and Rabbit wait eagerly to see what Mouse will do next.

2) After a library performance in which a young boy from the audience took on one of the roles in the story, I was speaking with his parents. I let them know what a great job he had done and how I felt that he showed great promise for drama and that it might be an activity for him to consider if it were of interest to him. His parents remarked that he had ADHD and had a hard time focusing. I would NEVER have guessed this from his on-stage performance where he stayed completely engaged and completely in character for the duration of the story. I certainly do not downplay his diagnosis in the least, but this reminds me that it’s important to help kids find the areas in which they have an interest and in which they excel as it may help them in more ways than one. I’m grateful that my programs can sometimes be an avenue for this.

3) At another library performance, I asked for volunteers and a young boy hopped right up to tak 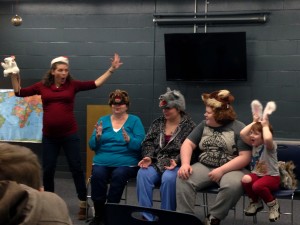 e on the role of rabbit in the story. As the story progressed and I needed more volunteers, he began to volunteer each member of his family. First his older brother, then his mother, then his grandmother, and lastly, his father! It was a small and rather shy crowd that day, so each of his family members ended up participating. The young boy was so involved in the story that he was “creating” it as we went along — coming up with ideas for what he thought should come next. When the program was over, he said, “Thanks for letting me act with you.” His grandmother had seen me perform two summers ago along with her older grandson. She came up to me and said, “Thank you so much for coming back here. I just know that God meant you to be telling stories. I was so excited to get over here and see you again that I could hardly wait.”  Talk about humbling! As a person who has struggled with vocation and wanting to fulfill my God-given purpose through what I do, it sure means a lot to hear someone say something like that. And it’s awesome creating family memories that will long be remembered! 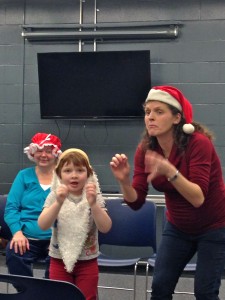 A scene from “The Elves and the Shoemaker”

4) After the same performance as described in #3, a mother came up to me with her young son. She thanked me for the show and said that it had kept her son’s attention, which was hard to do. She then held out an ipad to him and said, “Is there something you’d like to say?” He pressed a key on the Ipad, and I heard it say, “Thank You.” It was then that I realized that the little boy was non-verbal. But it was amazing the way that technology had given him a voice and a way to communicate with me. Such a beautiful moment.