Last November I attended a storytelling workshop in Illinois where I happened to meet a young pastor, Chance, who was preparing to move to Africa with his family. As the African continent holds a special allure for me, I was immediately interested; but my ears really perked up when I heard him say that he would be moving to the country of Sierra Leone.

During the time that I lived in Madrid, my husband and I became friends with a man named Abu Bhakar. He was a refugee from Sierra Leone, having fled his homeland in the aftermath of the horrible civil war that wreaked havoc on his country. One day, Abu Bhakar disappeared, and I wondered what happened to him. Months later, after I had moved back to the States, he called my Spanish cell phone to say that he had been transferred to a refugee center in another part of Spain and was doing well. My husband (then my fiance) had held onto the phone. He took the call and relayed the news to me. I was overjoyed. That was the last I ever heard from Abu Bhakar, and although we lost contact, I often think of him and hope that he is still doing well. Someday I hope to visit his country, and if I do, I’m sure I will see his face and hear his voice in the people that I meet. Perhaps that is why I long to go there so badly.

At any rate, Chance shared with me that he was going to be the director of the Children Redemption Orphanage Home (CROH) in Sierra Leone. But while still in the States, he was busy looking for ways to meet the physical needs of the children, particularly providing food. Since rice is a staple in their diet, he came up with the Orphan13 project.

The project is simple. People are recruited to collect aluminum cans. (Aluminum happens to be #13 on the periodic table, hence the Orphan13 name!) They trade in their cans at a local recycling center for cash. The money is sent to Orphan13 and is used to buy rice for the children.

I have always loved recycling as a means of helping to preserve the planet’s natural resources, but I had never before considered cashing in my cans. At first I had my doubts, maybe a lot of cans would be needed to make an impact. We don’t drink a lot of pop in my house, so maybe it wouldn’t be worth it for my family to get involved. 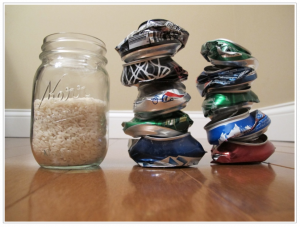 This is how much rice 10 recycled cans can buy!

But then I visited the website and saw that even a small amount of cans can make a difference! And so I’ve been faithfully collecting my cans ever since and my bag is almost full! When it is, I’ll head over to the recycling center, cash it in and forward my earnings to the Orphan13 project.

Perhaps you would like to help too! Perhaps you are already recycling cans. Or perhaps you’d be willing to start! You could collect cans at home, at your child’s school, at your place of work, at your church, anywhere you can think of! Get the whole family involved. Make it fun! This simple, yet sacrificial, act can make a significant difference in the life of a child in Sierra Leone.

If you decide that you’d like to be involved (and I hope you will!), the proceeds from your can collecting can be mailed to:

If you do get involved, I’d love to hear about it! Feel free to share your comments and ideas below! And please spread the word to your family and friends too. The more people who are involved, the more children we can help. To learn more about the children at CROH and to hear their stories, click here. 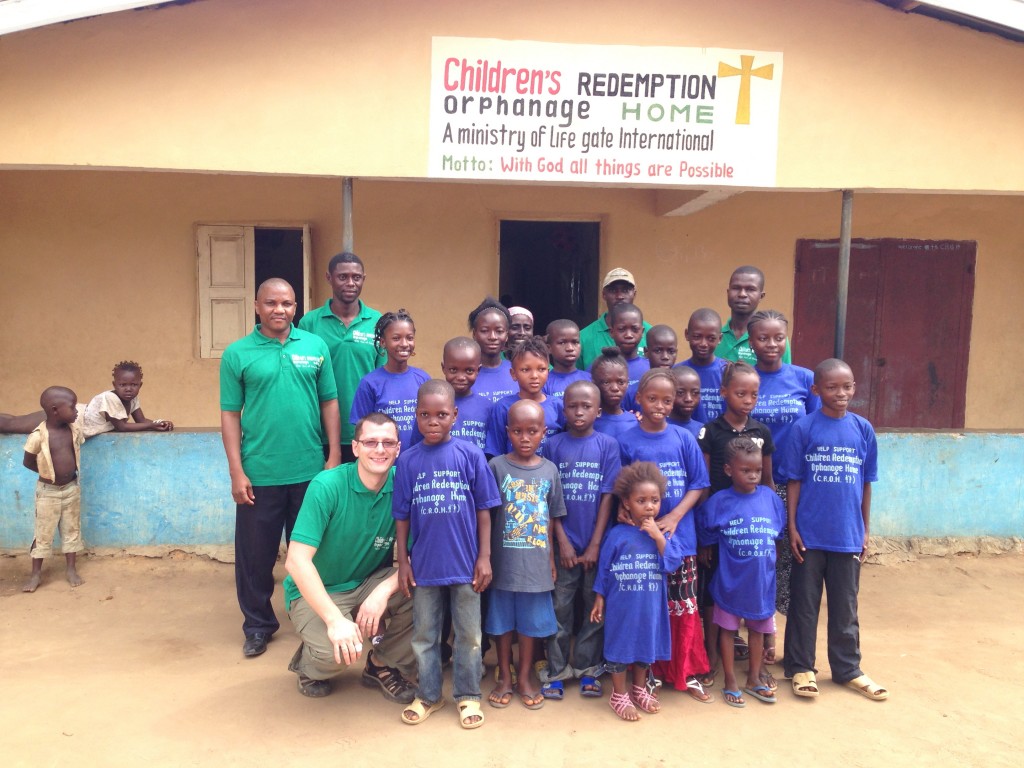 The children and staff of Children’s Redemption Orphanage Home along with Pastor Chance. These are the faces of the beautiful children you will be helping through your can collecting!

Remember, together we can make a world of difference!