My second day in Greene County started out in Jamestown. The shows here take place in the court house/town hall so it’s a very unique atmosphere. We had a great crowd with 111 people. And since there was no room that I could “hide” in before the start of the show in order to make my entrance, I did a little bit of improvising. I ended up doing some “weight-lifting” with my plastic shovel as I told the audience that I was getting ready to “dig into reading.” It was fun getting some of the kids to join in with me as we did curls, dead-lifts, and chest presses. A girl in the front row shook her head at my plastic shovel and said, “That’s not very heavy.” I told her that she was right, but that it didn’t have to be to get a work-out. But her suggestion led me to get the audience to imagine that they were holding a very heavy weight and to pantomime how they would do it. Some kids got really into it. 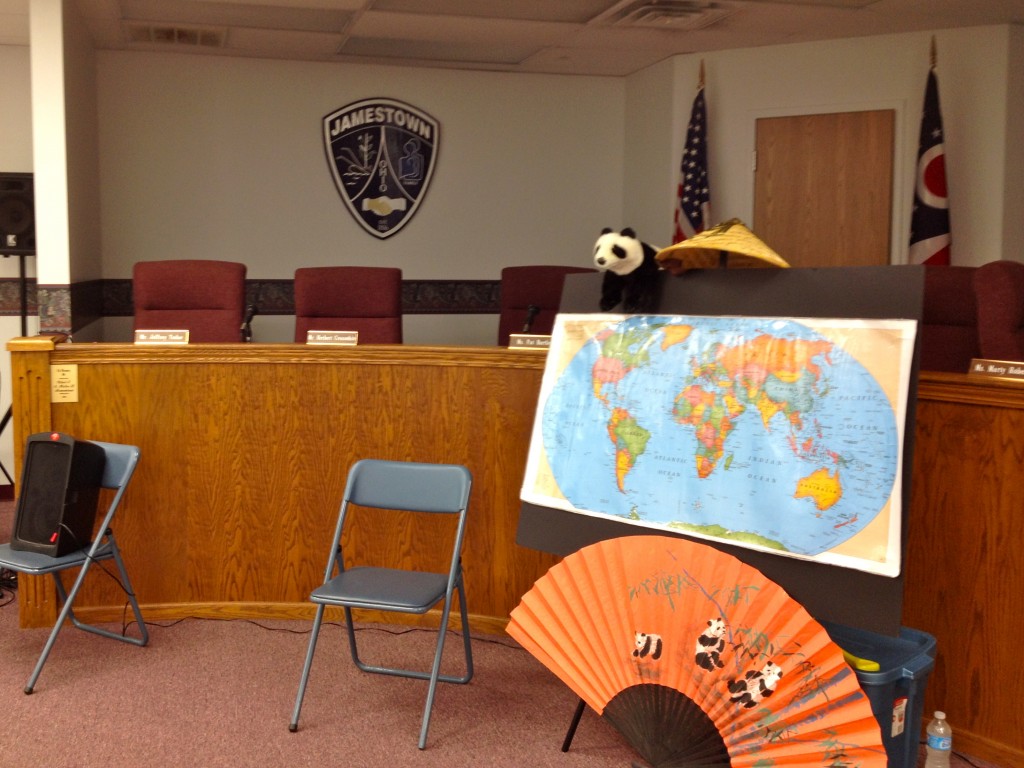 A look at the unique performance space in Jamestown.

From Jamestown it was on to Cedarville where things really got interesting! There was one little boy who was playing the character of Li in my story. Li is a poor man who is given a fortune by his rich neighbor in the hopes that he will no longer sing his happy songs which the neighbor finds distracting. Once Li receives the money, he tries to decide how he will spend, coming up with various ideas.  By the end of the story, Li realizes that the wealth has changed him and the way he treats others, including his family, and he decides to give it back without spending any of it.

However, before we get to that part of the story, I list some of the ideas that Li comes up with for spending the money. One of those is new furniture for the house. Then I ask the child playing Li, “Don’t you think your wife will like that?” On almost every occasion, they say yes. But on this particular day the boy playing Li shook his head, no. I followed that up with the next question. “Okay, what about a new house altogether?”

Again he shook his head and said, “No, I don’t think my wife would like that. She likes our house the way that it is.” Of course, his response left the audience and I quite impressed. Then before I could even begin to list off some of the other ideas Li had for the money or get to the part of the story where it begins to consume his thoughts and change his behavior for the worst, the boy said, “I know what I’m going to do with these coins. I’m going to take them back to my neighbor.” Again, the audience and I were amazed at his perceptiveness. He didn’t need to hear what happened next in the story. As the character, he just knew. And he was ready to take the coins back before they could change him for the worst. This story is about contentment, and the child participating in it displayed that he understood that on a deep level. Such moments when the children in role teach all of us adults a lesson are always precious to me.

Another character in my storytelling is “Rich.” Rich is my mini-Story Treasure Chest, and I tell the audience members that whenever I’m not sure which story to tell, I just ask Rich and he tells me which one. All I have to do is put my ear up to the chest and listen. At a couple of other points during my show, Rich shares other interesting anecdotes, and the children seem to enjoy him. After the program, some like to come up and listen to him for themselves. 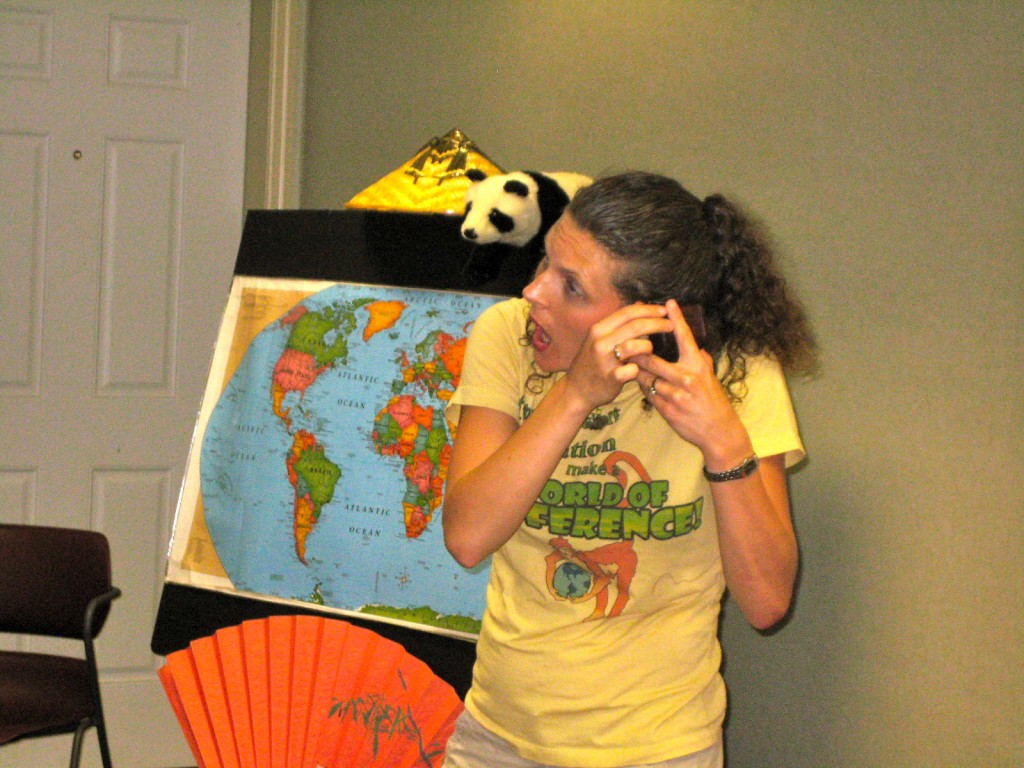 It’s interesting because some children will say, “He didn’t say anything,” while others will carry on whole conversations with him, telling you exactly what he said. Such was the case with my friend Dalton as seen in the picture at the top of the page. Rich told him all sorts of things, including the fact that he should try on one of the costumes from the show. Then as we went to have our picture taken together, he said that Rich said that I was supposed to put on one of the costumes as well. Later Rich wanted to play Hide and Seek, so Dalton hid him while I went searching. As the game went on, Rich began making some requests that could not be heeded, so it turned out that Rich “was sleepy and needed to take a nap since he starts to say funny things when he gets tired.” All in all, it was fun to see a child’s imagination engaged so deeply in creative play.

I can’t bring up the Cedarville show without mentioning the young boy who came up to help me and then proceeded to do a standing free fall, only putting his arms out to break his fall at the last moment before impact. This free fall came out of nowhere. It was completely unprovoked by me or anything related to the show. It took me and the entire audience completely by surprise! When I knelt down to see if he was okay, thankfully I was greeted by laughter and no tears. He was fine. Still it was a scary moment, the first of its kind for me, and not one I would like to repeat.

I guess it was a good reminder that children (especially young boys!) are unpredictable. After his free fall, the boy seemed content to sit down. Having had his moment of fame, he no longer felt the need to play a character in the story. Honestly, this worked out better for me since I had no clue what he might try next and didn’t want to find out! To the young girl that came up to fill his role, I said, “You’re not planning on doing anything dangerous are you?” She shook her head, and thankfully, she remained true to her word.

As you can see, storytelling as a profession is not as safe as it may sound. And certainly not for the faint of heart! 🙂