After my performance in Xenia, I headed over to Bellbrook Library where I’ve performed for the last 4 years and become good friends with Joanne Mushala, the head children’s librarian there (see photo above). Last year Joanne introduced me to a local fixture, the Dairy Shed, where she treated me to a cone after my performance. I remember wishing that I’d gotten a photo of us that day. This year Joanne had to head back to the library, but I did remember to get a photo of us first. Then I headed over to the Dairy Shed and enjoyed a Cake Batter Frozen Yogurt Cone! Yum! If you’re even in Bellbrook, be sure to give the Dairy Shed a try.

My performances in Bellbrook take place at the Bellbrook Presbyterian Church since the library does not have the space. I am thankful to them for opening up their meeting space to us. It’s a cozy room to present in. Last year the pastor happened to drop in on my Australian folktale performance and stayed to watch. This year when I arrived to set up, he remembered just who I was and popped in again! 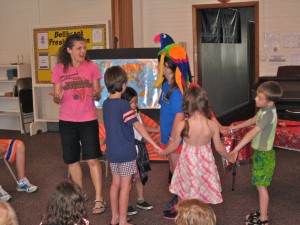 From Bellbrook, I headed over to Yellow Springs, another library I’ve visited for the past four years and where I’ve developed a relationship with children’s librarian, Ann Cooper. She is actually the one responsible for bringing me to Greene County in the first place. I honestly don’t remember how we got connected, but I’m glad we did.

Well, a little while after my performance ended, Ann came up to me and said that she had wanted to introduce me to someone. It was Virginia Hamilton’s son who had been in the audience. His daughter had actually come up to participate in the performance on a couple of occasions too. She then reminded me that it was the fund in his mother’s honor which has paid for my performances over the last few years.

While she didn’t get to specifically introduce us, as Ann described who he was, I realized that he had come up after the program to shake my hand and to tell me what a great job I had done. I was pretty excited to have received a compliment from someone who I can only imagine grew up hearing amazing stories — and from a legend in multicultural literature to boot! Ann also gave me a compliment, saying, “There was one child that participated in the show, and that is the best I have ever seen them behave at a library program.” Yay!

I have always believed that some of the children that have a reputation for “acting out” have just not found what they are good at yet. They want attention, but don’t know the best way to get it. Sometimes, learning that they can channel their energies into something creative like acting where they can be big and loud at times and get positive attention for it is a revelation. So often I find it’s the children who are labeled “problem students” who amaze their teachers when they come up and literally steal the show while performing in one of my stories. That’s why I never like to ask ahead of time who I should pick and who I shouldn’t. While at times this can lead to a greater challenge for me since I honestly never know what I’m going to get (and believe me, sometimes I really get surprised!), it keeps me from developing pre-conceived notions about audience members and excluding them based on their past behaviors. It also keeps open that possibility of allowing a child to shine who perhaps has never had the chance to do so.

Lastly, Ann shared with me that she too enjoys my visits and always tries to learn more of my techniques as I tell. She has already incorporated some of these into her storytelling programs at the library, particularly some of the audience participation stuff. I had meant to get a photo with her too, but I forgot. Maybe next year?!