I had a great few days on the road! While visiting some libraries in Greene County, I was able to stay with two of my college friends who are now married. I even got to meet their adorable baby girl who you see in the photo! (Notice we both have monkeys on our shirts!) Catching up with old friends is one of the perks I try to build into traveling for work!

Another perk for me is the relationships that I have built with librarians and families in some of these far-from-home communities. I have a four year relationship with some libraries in Greene County, and it’s fun for me to see some of the same faces and to see how the children have grown from one year to the next. 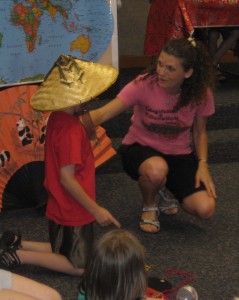 “Li” and I in the middle of the story

My first stop on this trip was to the Xenia Community Library. This was my third year there. And for all three of those years, one family has arrived early to get front row seats. This year was no exception. The oldest of their bunch, a boy of about eight years, ended up taking on a role in the story. When it was over, he told me, “That was fun. I want to be Li again.”

I smiled and said, “You can! You can be Li anywhere you want to be because you can act out his story all on your own.” To which he smiled and nodded back.

Then he and his younger sister went over to my merchandise table along with their father. It didn’t take long for them to hone in on my latest DVD “Voyage to Russia,” and as the father reached for his wallet to purchase it, he told me how much his children love the first DVD “Flight to India,” and how they watch it all the time. A moment or so later, the young boy approached me with his new DVD and said, “Will you have another one of these next year?”

I wanted to be able to tell him yes. That is actually one of my dreams — being able to make a whole DVD series. Unfortunately, I doubt that another film is in the cards for next year unless I can get a grant. (If you have any ideas on how to go about this, please let me know!)

However, I love the faith of children and how they draw conclusions. “I got one DVD last year, a second this year, so that should mean that next year I’ll be able to get a third!” When I told the boy that I doubted I would have another DVD next year, he still ran over to his father and said, “Dad, I want to come back next year.”

Again, there’s that child-like faith. He doesn’t ask if I will be back next year; he just assumes I will. After all, I’ve been there three years in a row. I’ve become part of his summer routine by now. And he and his family have become part of mine.